Can I help me write this review?

Despite being a spin-off to one of my favorite pieces of fiction ever, Little Busters!, I didn’t have high expectations coming into Kud Wafter. VN into anime adaptations are always scary, even more so when they’re getting adapted as movies. More so, Kud Wafter was never thought of as quality work in the first place, and Studio Key in general doesn’t have a good record when it comes to spin-offs. Yeah, I’m still pissed about Tomoyo After.

Surprisingly enough however, the final product we got turned out to be much better than I ever would’ve expected. The movie starts out in a very lighthearted manner, aiming at providing classic Little Busters! comedy content, which is very much welcome. The whole group of characters is back at it with more jokes, banter and just being themselves This group of characters is simply wonderful and manages to be incredibly hilarious at all costs. The only sad part is that the best girl, Rin, has probably the smallest role out of anyone in the movie. 2020 hasn’t been sad enough apparently :(

The biggest question marks with Key shows are always their transitions from comedy to drama, which can often be sloppy, rushed, and overall poorly executed. This is sadly the case here as well, as the movie at one point randomly decides it’s tired of being a comedy, and in a matter of few scenes totally changes its tone and narrative, without much explanation as to why. This very strange and unnatural transition is definitely the biggest weakness of the movie, and if it were half an hour longer and used that time to patch this hole, the end result would also be much more satisfying. 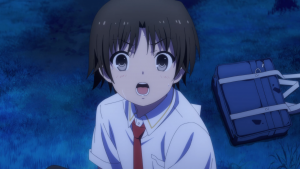 Even Riki is hyped.

After such a poor tone-change, one would expect the whole dramatic side of the movie to crumble. Surprisingly enough, that isn’t necessarily the case, as the movie manages to pick itself back up. That is achieved mainly by keeping things simple and in-line with what the original Little Busters story provided. The movie fully capitalizes on the fact that it doesn’t have to build a new conflict from scratch, and instead works as an extension of a story we already know. Thanks to that, the only thing it can focus on is the execution of said extension, which is why, even though with very limited time, it does manage to tell Kud’s personal story relatively well. There are no glaring weaknesses when the drama is in full swing, and some interesting direction elements (chains, chains everywhere) help to keep the movie fresh and interesting.

Kud’s character doesn’t go through much we haven’t already seen her go through in the original show, although the ending of this movie does give her side of the story a more complete closure, which is definitely a good thing. The ending scene overall is quite sudden but incredibly important and powerful, while also managing to be very sad without really trying too hard to appear so.

One area Kud Wafter definitely could’ve been better at are the production values. The animation oftentimes feels sloppy, despite the project only being about 50 minutes long and also getting postponed a few times. Not only a bigger budget would make the anime look more consistent, it would also help to produce some interesting direction choices and elements (*cough* pantsu *cough*) into their fullest potential. But, we can’t except that much from a crowdfunded project, I guess.

Which is honestly why I’m even more surprised that this turned out the way it did. Sure, this movie definitely ain’t no masterpiece, and it also is more silly and fun than legitimately meaningful and profound, but considering what kind of project it is and what I expected of it, I really have no reason to dislike the work presented here as a whole.

It’s funny, sweet, it has Kud, and it does considerably well in its dramatic parts as well.

Hereby I can crown Kud Wafter as a success.

Ah, there’s Rin. As sharp as ever.

The Bad: Too short | Bad tone-change in the middle | Not enough Rin | Animation sometimes | Really too short