Shuumatsu Nani Shitemasu ka? Isogashii Desu ka? Sukutte Moratte Ii Desu ka? or SukaSuka, is an anime about betrayal. SukaSuka will betray your expectations, your hope, it’s characters, and even it’s own plot.

The story is what drew me to SukaSuka. We’re thrown in to a dystopian world where humanity has been utterly wiped out, all but one survivor. Willem, our protagonist who was spared the cruel fate the rest of humanity faced by getting himself petrified for 500 years. Aside from the shit looking airships, the art portrays this world quite well with the many epic shots of the barren surface world.

In order to survive in this barren world under attack, the military has employed leprechauns. The leprechauns are raised on a troll’s farm and brainwashed or “tuned” to have no regard for their own lives. Having no will to live is important for the leprechauns because they have to blow their own minds to defeat the beasts.

All in all, this sounds like an extremely intriguing story, so let’s begin the betrayal. While SukaSuka sounds great in theory, the execution of it takes that theory and shoves it up your ass. Forget about the great story, let’s spend 3 episodes on a side-character in a 13 episode anime, let’s spend time on hollow exposition, then repeat it 3 or 4 times. There are times when characters ask a genuine question, then move on before anyone has a chance to answer them because even the characters know they won’t get a satisfying answer. The story was either ignored, or revealed to us in the most boring ways possible. This series would serve better as an audiobook than an actual animated series. 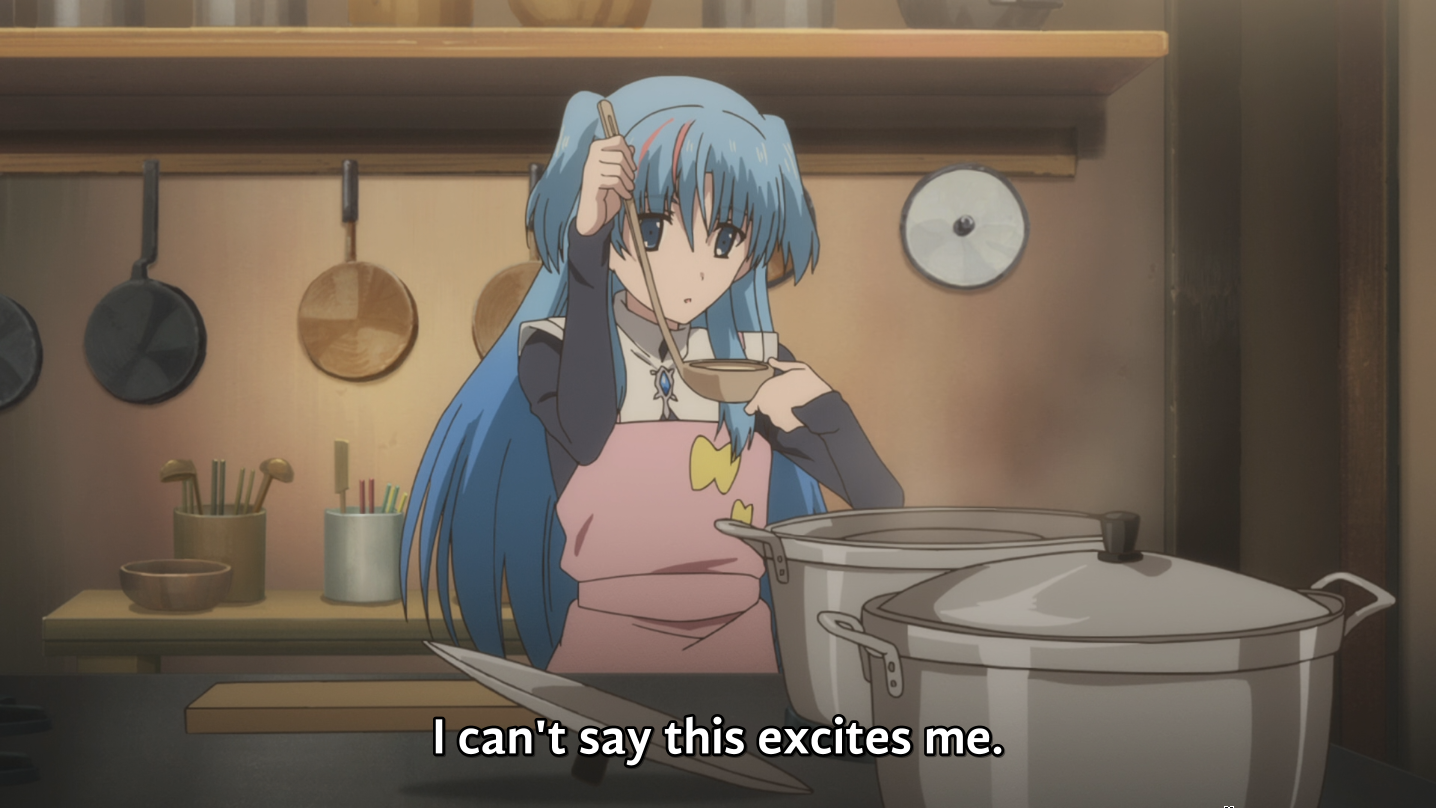 I know, Chtholly, I’m not super thrilled about it either.

Minor spoilers beyond this point. 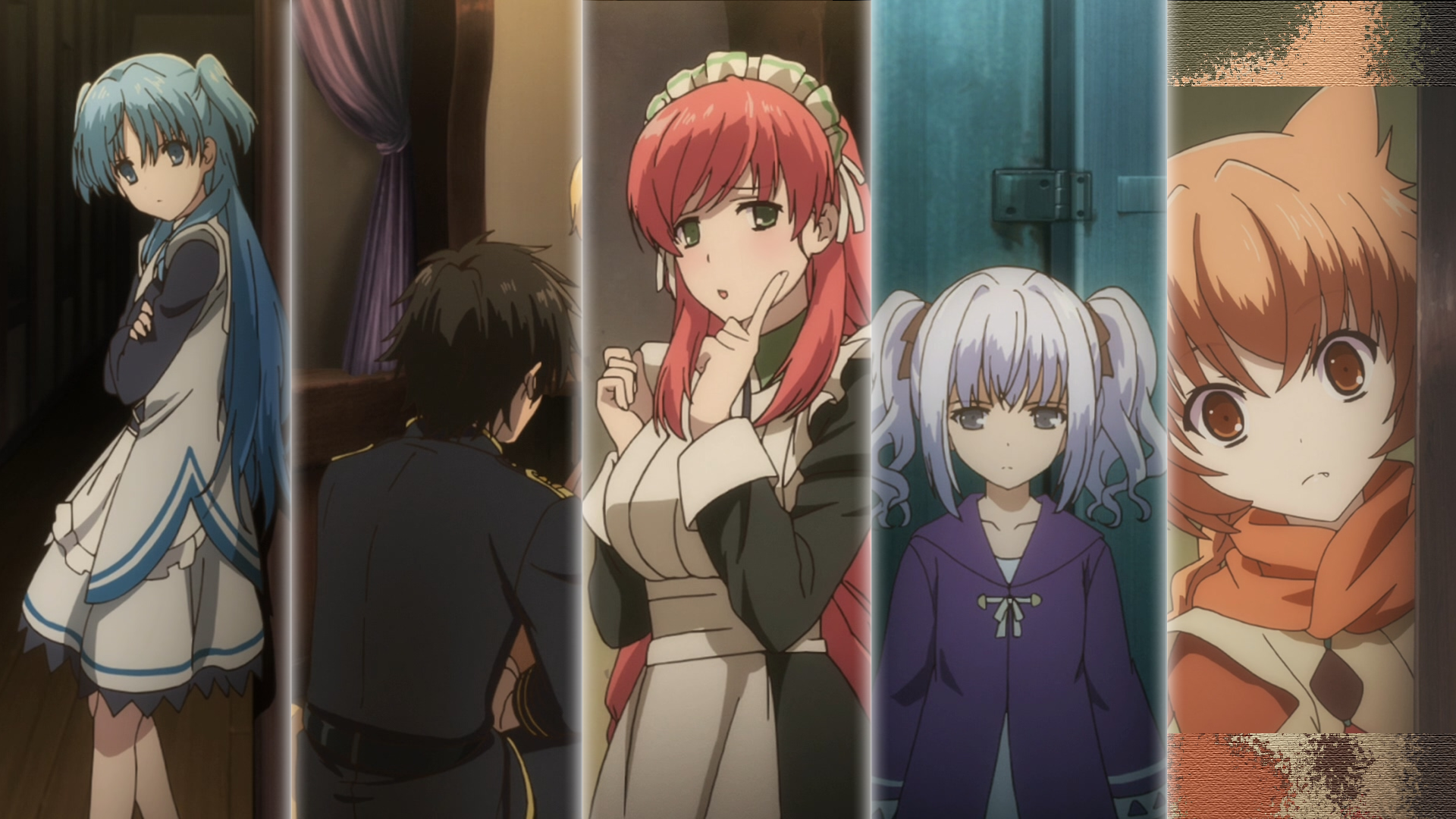 I liked Chtholly as a character, although I’m not quite sure if the reasons I like her were intended traits by the writer. Chtholly in any other universe would just be your basic tsundere who calls the protagonist a baka and kicks him in the groin to the very last episode. Chtholly understands that the world she lives in won’t allow her to live out that kind of life, she must act on her feelings because death is a knocking on everyone’s door in this anime, especially the leprechauns’. The romance between Chtholly and Willem feels quite shallow, but because of the world they live in, it doesn’t feel unreasonable. Chtholly is 14, about to die, and Willem is handsome and in a uniform. It’s either Willem, or a giant lizard. 14-year-old girls have developed less reasonable crushes than that, as far as I’m concerned. What is unreasonable, is how much time they spend trying to make this relationship deeper than it actually is, and sacrificing the world’s story to do so.

I mentioned that I’m not entirely sure if this is how the writer intended Chtholly to be, but at the end of the day, I’ll never know what the writer actually meant, so I can only take characters for how I see them. In this case, I’ll give Chtholly the benefit of the doubt for being a tsundere who tries to fight back against an archetype that is ingrained upon her but will do her no good. 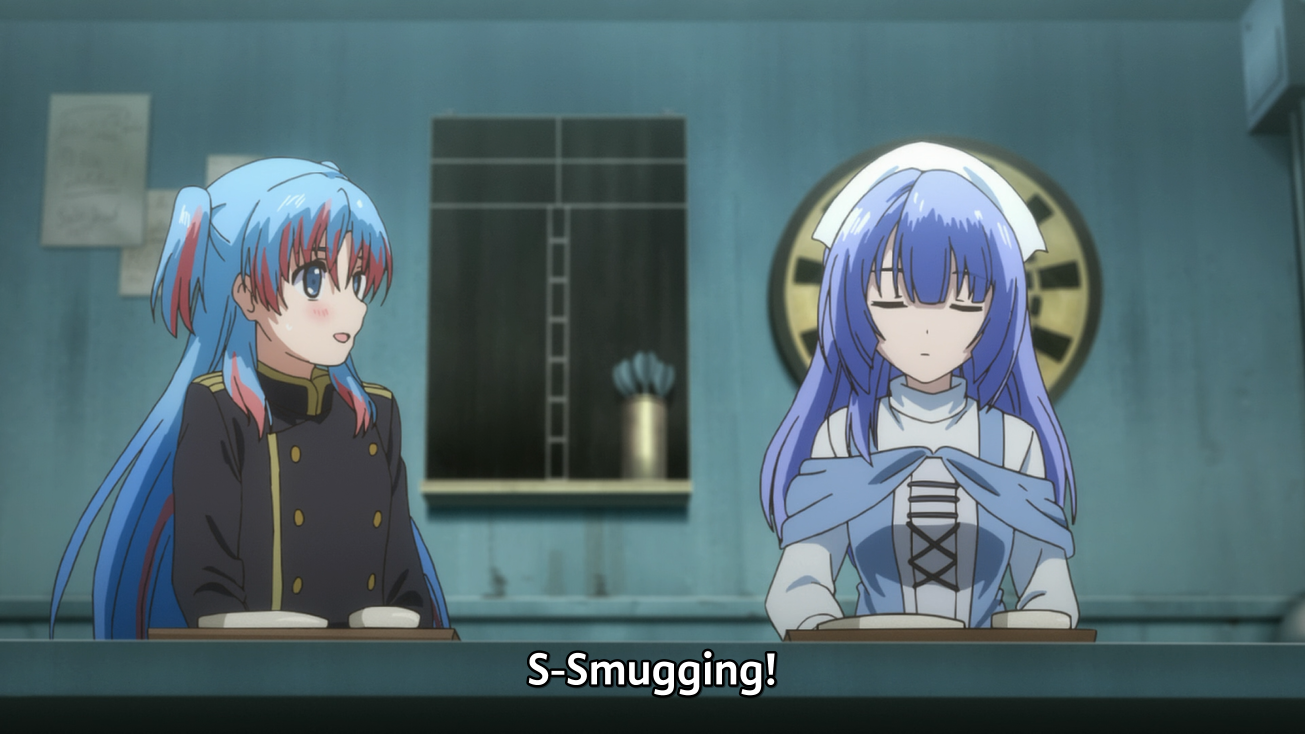 Willem is a decent dude, but fails to live up to his abilities and to his legend. Just like Chtholly, he might be a pretty reasonable and likable guy until their relationship comes in to play. When Chtholly isn’t around, Willem is a caring father figure with a logical frame of thought and some uber powers. When Chtholly comes into the picture, he falls to his knees, uses his powers to enact scenes of pure cringe, and does the most pointless and irrational things. That’s just how much he loves Chtholly though, right? No, fuck off, he pulls this shit as early as episode 4. We as viewers had more emotion invested in Chtholly at this point than he did and I gave maybe 0.3 fucks about her safety. 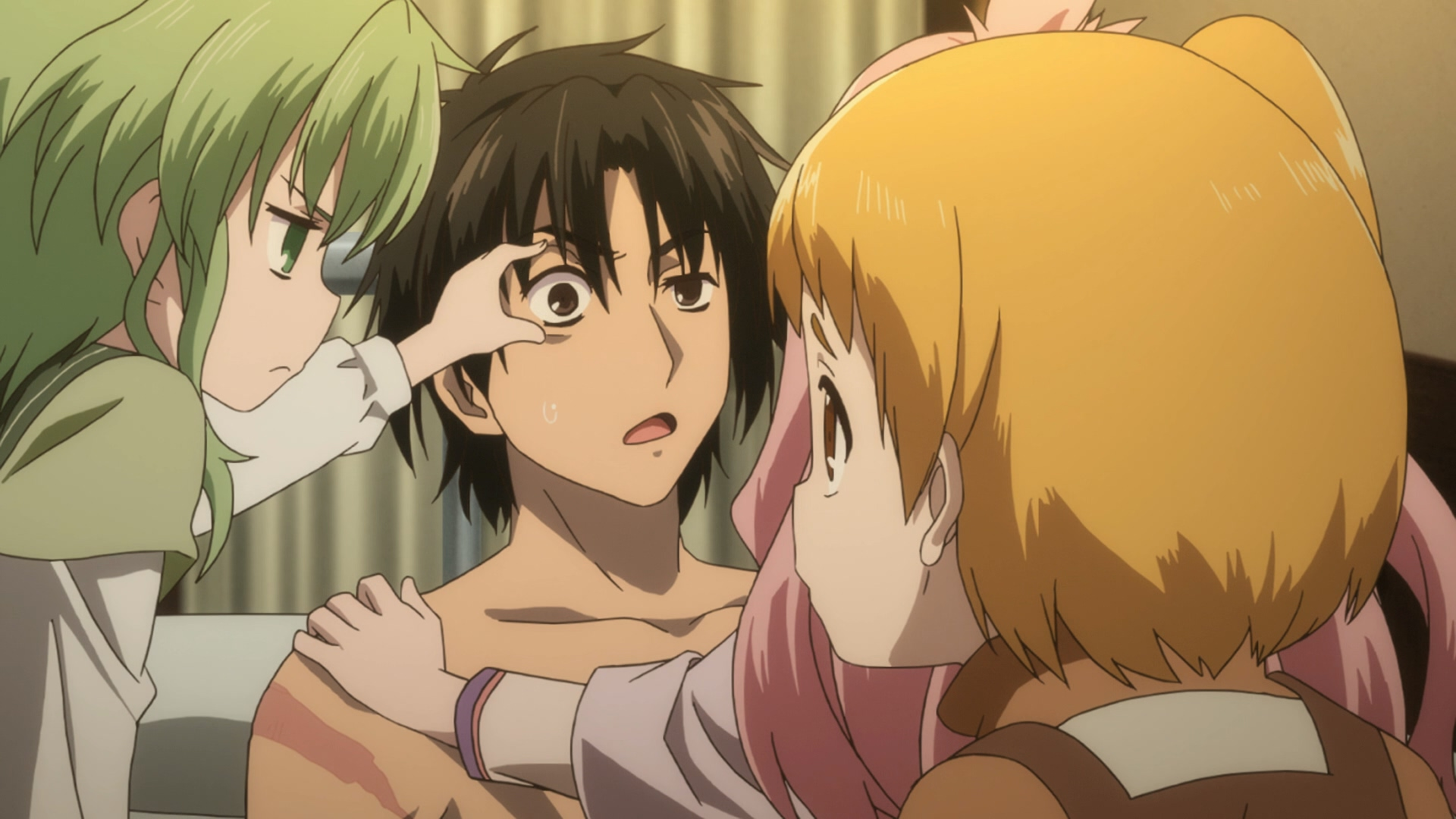 Unfortunately, Nygglatho isn’t an original character in this series. She is actually from The Promised Neverland but cameos in SukaSuka for a few episodes just to nom on a few main characters. Nygglatho is a troll that runs a leprechaun farm where Willem is stationed. Willem showing up puts a wrench in her plans because she knows that he is too righteous to go along with her leprechaun eating scheme. Eventually, Willem finds out what she is doing and demands a tier-0 waifu as ransom to keep his mouth shut. Nygglatho scours the internet and compiles 783GB worth of anime memes, then uploads them into Chtholly’s hair and offers her to Willem. Willem isn’t 100% pleased, but accepts it because it’s either that or dog girl w/smol hat. 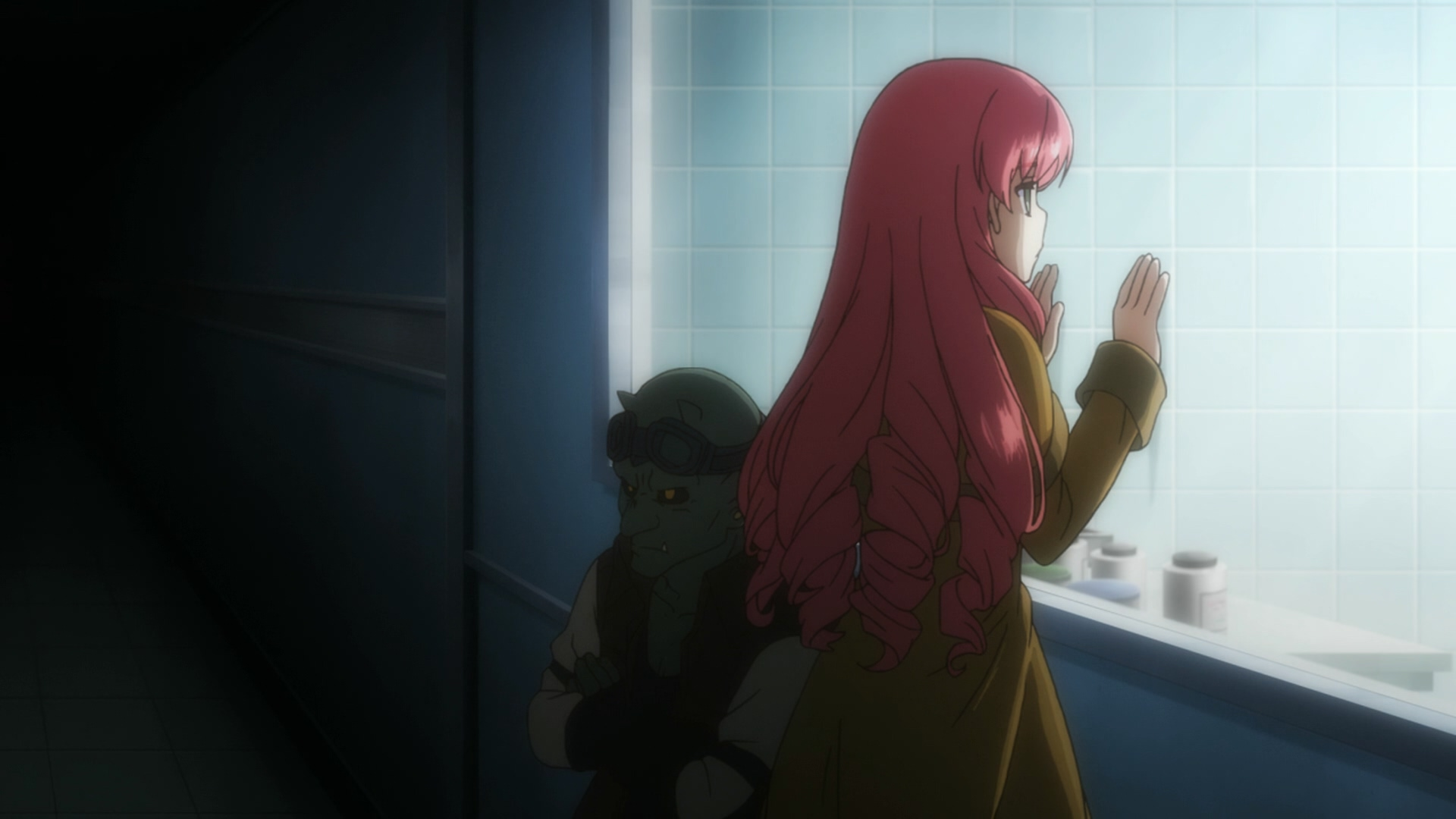 Nygglatho viewing Chtholly after the “procedure”. She isn’t proud of her creation, but she needed the upvotes. As is the case for all memes.

None of this is true, Nygglatho is the maid of the leprechauns. She does nothing meaningful in the series, yet she was still the best character.

Renge Nephren is a character who, despite having a decent amount of screen time, I forgot existed for the majority of the series. Whenever she showed up, I would scream for joy that Renge somehow made it into this series. That was of course, then met with the realization that her nyanpass is only skin deep. Nephren does some incredibly cool things at the end of the series, but is otherwise just a side-daughter for Willem to develop some shallow feelings towards. 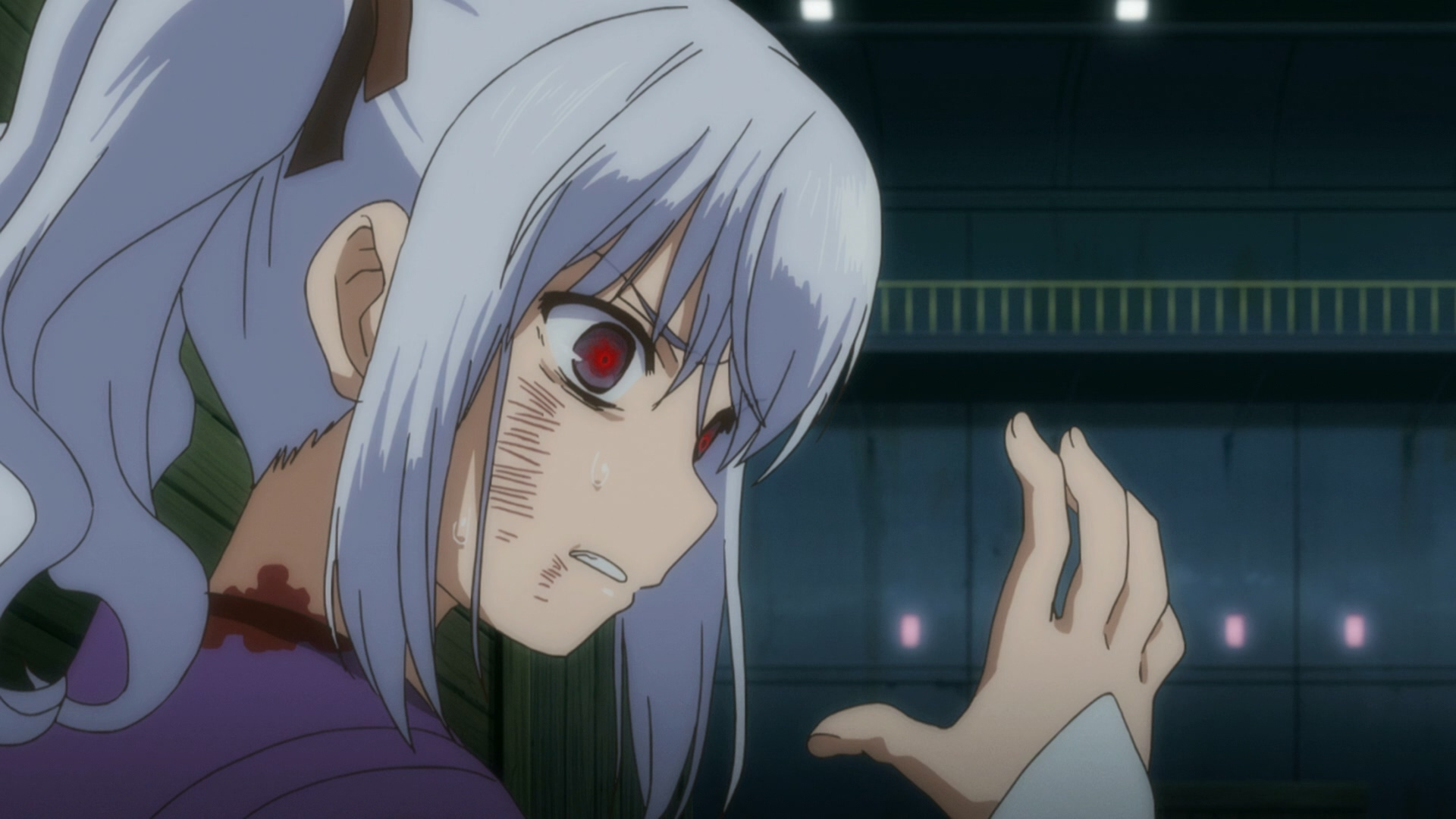 Nephren’s face when she tries to understand this anime’s plot.

Major spoilers beyond this point.

Ithea is a tomboy neko girl who is fucking sick of everyone in this anime. She tries to get everyone to stop being a bunch of assholes, but they don’t listen to her. At the end of the anime everyone fucks off to do dumb shit while she and Nygglatho take over the farm. As expected, without Ithea keeping everyone in line, they all die. 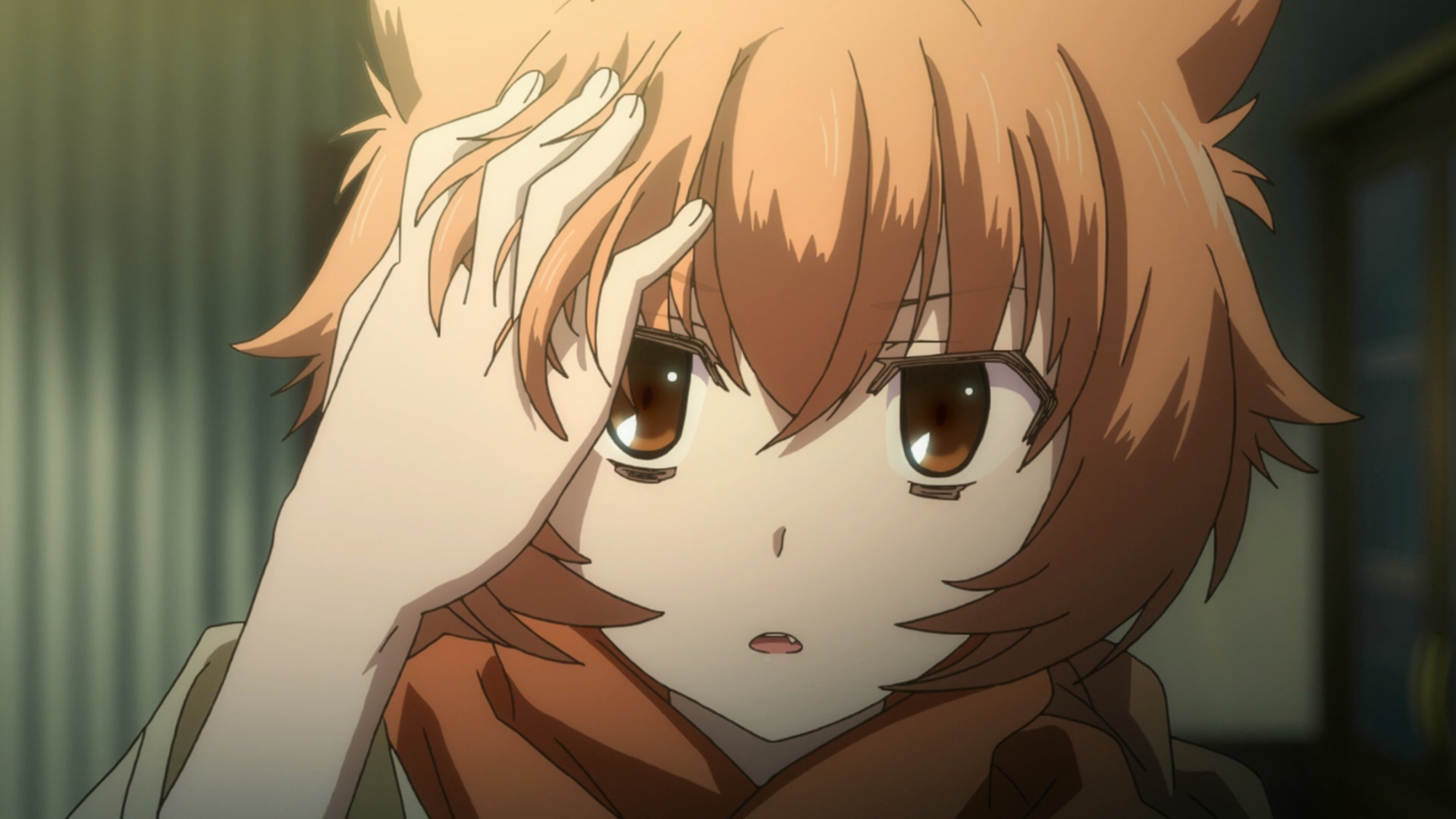 Ithea resisting the urge to facepalm on stage.

By the time the anime ended, I still barely understood what was going on. No thanks to the fact that we had to have half of the plot explained to us by a retarded child that decides to talk like yoda only while explaining important plot elements. Maybe she didn’t actually talk like that and the translator just lost most of his will to live by the final episode, who knows.

Luckily, 5Sunstorm went through the motions of getting more info from google-senpai and some LN readers. He was nice enough to clear a lot of the plot up in our discord (yay group watches and bonus knowledge). Even understanding the plot, I can’t say I’m happy with how it was told or even anything that happened in this anime in general. With that being said, let’s get to the reason we’re all here, meaningless numbers:

SukaSuka is a great idea. On paper, the world sounds amazing. In fact, on screen, the world looks amazing. The story and the setting sound like a really good dystopian adventure with fresh plot elements and some nice twists.

A great idea with terrible execution. Characters are forgotten about, questions are left unanswered, and major plot developments are revealed via yawn inducing conversations. The art and the animation keeps this from being a 1, but those things weigh very little on execution. They will play a bigger factor in enjoyment.

Even with all it’s faults, there was some joy to be found in SukaSuka. Like I mentioned, the art was really nice to look at (aside from the airships which looked like floating garbage) and there were actually some pretty fun moments in the anime. There’s an emoji chef, a cute dog girl who is pointless to the plot, the silly little leprechauns, a rabbit named Brony, and Tiat. Tiat, the lizard movie fan girl.

I would not recommend this anime to anyone. It might be enjoyable if you’re coming from the LN and already understand how the plot works as well as experienced better character development. If that’s the case, you wouldn’t need me to recommend it to you, you’ll probably watch it anyway.

This brings us to an over all score of 4.5. I don’t deal in decimals and series don’t get rounded up if they aren’t good enough to make it to the next whole number. SukaSuka, meet the number 4.

SukaSuka is the real tsundere here. This is an anime that I wanted to love, but it just didn’t let me.