The story of SukaSuka is set in a apocalyptic world 500 years after all humans died. The civilization is now comprised of other human-like species with animal-like qualities and they live on floating islands in the sky. However, one human, the main character Willem, managed to survive because he was turned into stone. Since the beasts that destroyed humanity are still inhabiting the surface of the planet, the residents of the floating islands need weapons to fight against them. For that purpose they have a warehouse full of fairies ready to fight and sacrifice themselves with no hesitation. The story starts when Willem is hired as a caretaker for the fairies.

The story starts slow. Very slow. The plot only actually starts around episode 10. Most of the anime is just these short individual arcs that have little to do with the main plot and don’t develop the characters. The show does remember to throw in some unnecessary drama too. There’s some world-building but in the end none of it makes any sense. Whenever the show gives you answers it just raises more questions and by the end of the series you’re left more confused than when you started. The world would’ve been very interesting if the world-building was handled better though. Especially the cool swords could’ve gotten way more attention. 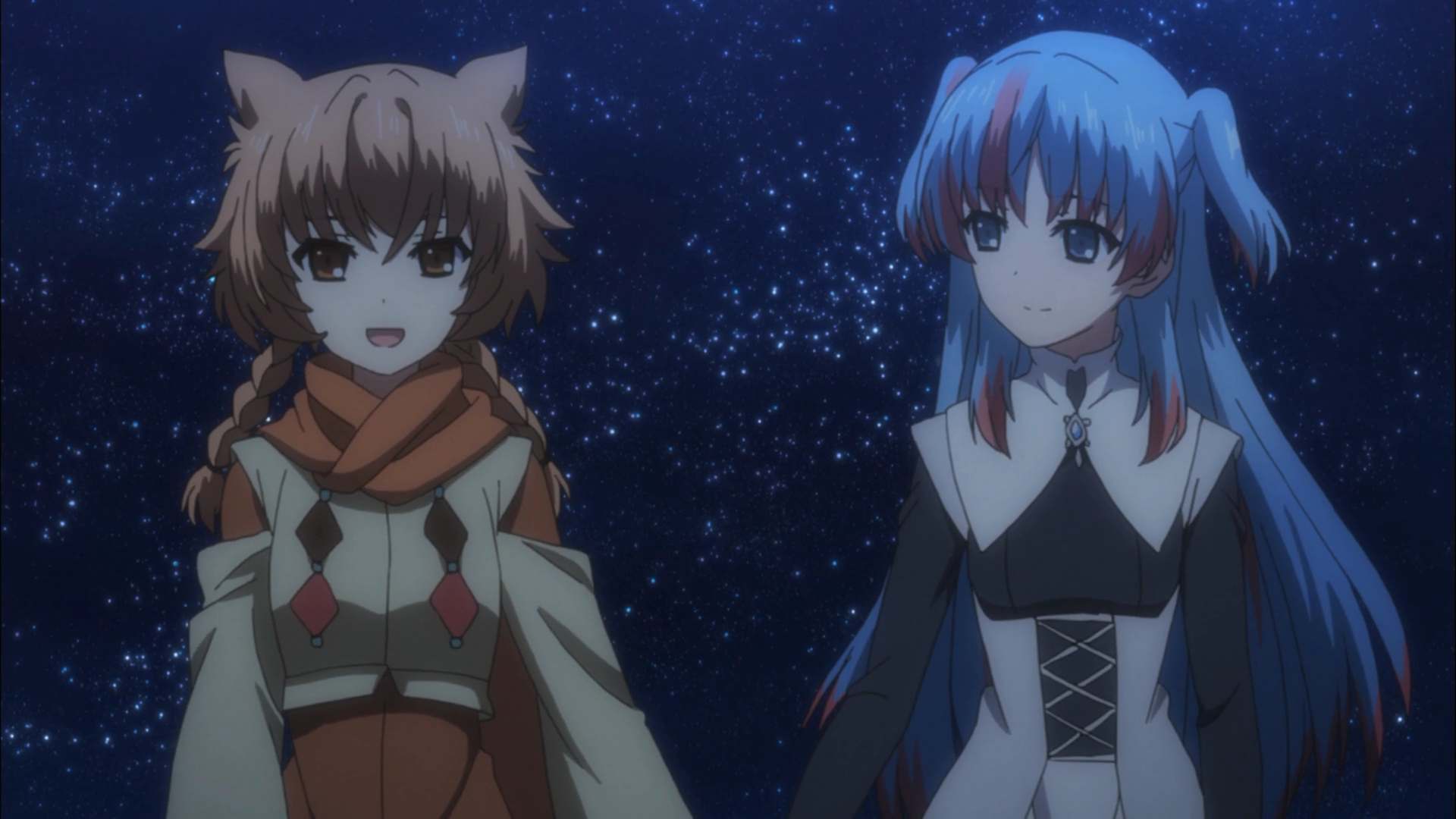 The best character Ithea and the main girl Chtholly talking about their problems in one of the best scenes in the show.

The focus throughout the series is the romance between Willem and Chtholly. Chtholly is a fairy who doesn’t have a lot of time left alive. She falls in love with Willem during their first scene together, which is reasonable given her situation and age. From then on the romance is handled terribly. Often the romance is more important than common sense and the characters, especially Chtholly, end up worrying more about their love problems than their actual, life-threatening problems. Sometimes Chtholly openly admits that she loves Willem but sometimes she gets embarrassed when someone mention it. Her attitude changes constantly. Willem has similar problems but not to the same extent. Overall the romance is very unbelievable, unrealistic and just not fun to watch. Every character with the exception of the cat girl Ithea is a boring and overused trope.

Probably the best part of the anime. It’s not amazing or anything but it looks good. The characters and the world are very brightly colored and it fits the tone of the series decently. The character designs look decent but the show could have used its setting with characters of many different species to make more unique character designs. All the important characters look like humans. The directing isn’t very good and it’s fairly apparent throughout the show. The scenes change too fast with nothing in between to give the viewer time to process the change and the many exposition scenes look boring with little movement.

The soundtrack isn’t good but for the most part it doesn’t hurt the show too much. Some songs really don’t fit the scene they’re in and some fit them decently. Nothing really stands out. The opening song is quite nice though. The opening is a fairly generic fantasy anime opening but it looks and sounds good.

SukaSuka isn’t a good series by any means. It tries to build an interesting world with an intriguing story and likable characters but instead it ends up with a confusing world with a story full of plot holes that doesn’t even tie all the events nicely together and flat characters that you could find in nearly any light novel adaptation. I wouldn’t describe it as entertaining but somehow it manages to be somewhat watchable until the last 3 episodes. Too bad the ending has the power to make people immediately regret wasting their time on this show.