To meme, or not to meme?

This question is not necessarily directed at the people (potentially) reading this. It is a question for myself. Should I go along with the memes and pretend Okaa-san is something that it isn’t? Or should I keep it serious? Who knows.

Okaa-san Online is about our main character and his mom who both get transferred into an MMORPG world whose main goal is to fix broken family relationships. Cool? Cool. Now forget most of that and just focus on one thing. Mom. More specifically THE Mom, aka Okaa-san, aka Mamako the Great. This show is about her and nothing else matters even slightly.

At least that’s how I understand it. But the creators, well, they seem to think a bit differently.

First of all, this show was bound to be a parody. And it actually is just that for the first 2 episodes, until the creators run out of jokes to make regarding other shows of similar setups. These 2 eps are decent, they are everything everyone asked out of the show. There is Mom, there is satire, and there is entertainment. After they pass by, satire is gone. The show suddenly has no idea how to make fun of its contemporaries or itself in a smart-manner, instead, it starts to re-use the most oblivious “haha we’re self-aware” jokes in the book. Parody is gone, so is the show’s soul.

Because, even though Mom can be a pretty fun character to watch, she’s also mind-numbingly one-dimensional. Her character is literally: an overpowered obnoxious mother who somehow always ends up in fanservice situations. And although I honestly liked her at the start, she became boring quickly, because of the fact that her moments didn’t bring any innovations over time. It was always the same formula placed into different situations that were quite unimaginative themselves (tentacle monsters, slime monsters, you name it). Even then, her character is still by far the best part this show has, and it is a huge mystery to me why didn’t the anime just focus on making good Mom content. Instead, Mom suddenly disappeared for big chunks of time to make a place for the “cool” MC and the other “cool” characters. I don’t think I have to explain how that ended up working.

The jokes and gags aren’t keeping the show afloat either. They’re incredibly dull, always make use of the most generic anime and isekai tropes and feel like they were written by a 5-year-old. The only two exceptions I can name here, aside from the first 2 episodes, are Porter’s bag-on-the-head jokes and a “flat as an ironing board” joke in the 11 episode that was honestly very well-timed.

All in all, Okaa-san eventually becomes the very thing it wanted to make fun of. It is the perfect resemblance of that Star Wars meme that goes “You were supposed to destroy the Sith, not join them” 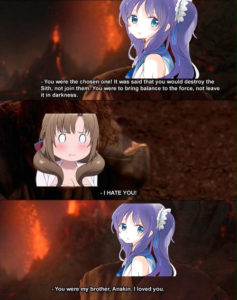 But honestly, the worst part of Okaa-san comes in when it tries to play the serious family relationship tones. It wants to make you feel like there is a message to be told and it focuses quite a lot of screentime on these things. But it never works. How could it anyway? These moments are so shallow, boring, one-dimensional and dull they can’t even work on their own so they have to be supported with yet another dose of Mom fanservice scenes. It honestly makes you wonder why didn’t they just make a few Mom shorts and cut everything else. I still wouldn’t call it a good show, but it would at least be its own show all the way through.

Because the thing Okaa-san disappointed me the most in is that it didn’t take pride in what it was. Trash shows can be fun and they can un-ironically become very good if they appreciate their trashiness and make the most of it. Just look at Summer’s Sounan Desu Ka? A survival/fanservice show that knew exactly what kind of content it wanted to produce and built an incredibly sincere, fun and fresh anime around it. It was maybe still trash, but it was 100% self-aware of that and wore it like an armor. Okaa-san didn’t do that. It didn’t want to continue being a parody. It didn’t want to be about the very thing that defined it. And it didn’t want to bring anything new to the anime trash scene either. It just wanted to run on the wave of isekai hype.

Which is sad, because Okaa-san really had the potential to be a great satiric piece making fun of the incredibly generic and dull isekai anime.

Yet, in the end, it is nothing more than yet another weak clone of the genre that wants to run all the way to the home base with one defining idea.

Sadly it didn’t realize that the ball it hit wasn’t a home run, but a fly out caught on the 1st base.

The Bad: Most jokes | Characters | Generic situations | Eventually becoming what it wanted to make fun of | Animation | “Serious” moments