It goes without saying that adaptations of this “god-knows-why-it’s-so-popular” genre of literature do not usually bring high-art value to the table. That isn’t inherently wrong per se, not every fiction needs to be aiming to be intelligent and complex, but there’s a certain line behind which no author should ever wander. And most LNs do cross this line in my eyes with their constant fan-pandering, awful comedy, and stupid drama. Still, I felt a genuine interest in what SukaSuka had to offer and I strongly believed it was the work that had the potential to change my opinion on this genre as a whole…

The story of Suka Suka is weird to describe. Is it a romantic drama, is it a story of war, or is it just a dumb comedy? I’d say it is a weird hybrid of all of those. One that doesn’t bond very well together. The general idea of a world on the verge of destruction due to a war with huge beasts in which our two main characters slowly fall in love with each other doesn’t sound bad, but it becomes apparent rather quickly that the anime doesn’t know what it wants to be. There are so many moments in the anime where the tone of the scene changes from second to second only then to change again after another half a minute. It never gives you any chance to get invested in anything since it’s trying so hard to fit everything into itself. The story overall is the biggest victim of this, as the general war-like plot is forgotten for huge parts of the series due to the anime focusing on the greatly-depicted relationship of our two main characters. Nothing that happens in the middle part of the show is even remotely important for the rest since most of those middle episodes are just comedy-reliefs anyway.

But I imagine most of those problems are part of the anime’s composition, which I’ll get to later, rather than the story as a whole. The story itself, however, is not much better. Plot-holes, plot-conveniences, face-palm worthy drama forcing – it has everything you expect an LN adaptation to have. The plot focuses more on the happy ever after life in the children house rather its interesting parts. It also tries to present some sort of character dilemma through the eyes of multiple people. Sadly, the show is once again not able to capitalize on that idea one bit, as these dilemmas come across as forced and rather ungenuine considering how flat and uninteresting the characters themselves are.

Speaking of characters, meet the ever-special protagonist of our story, Willem. If you’ve read or seen any fiction where the protagonist is surrounded by cute little girls, I think you already know what kind of person Willem is like. He’s nice, wants to help everyone and of course, he also possesses a dark past for the sake of inner monologues. He also hides the fact that he’s the strongest person alive. What a lucky guy, he really has a lot going for him. No, let’s stop with the irony for a moment. While it’s true that there’s nothing note-worthy about Willem or about the way he acts, and it’s also true that many of his drama-like moments come out as rather cringy, I’d say he’s still slightly better than your average cardboard hero. I got the feeling that he genuinely cares for the people close to him and he’s not just a “morals come first” type of a guy who would explode on everything that’s not according to his hero codex. Actually, if it wasn’t for his absolutely terrible taste in women, I’d say I even like the guy. But, you know, picking your favorite waifu is a pretty big deal. And in the world of Light Novels, it counts twice as much. 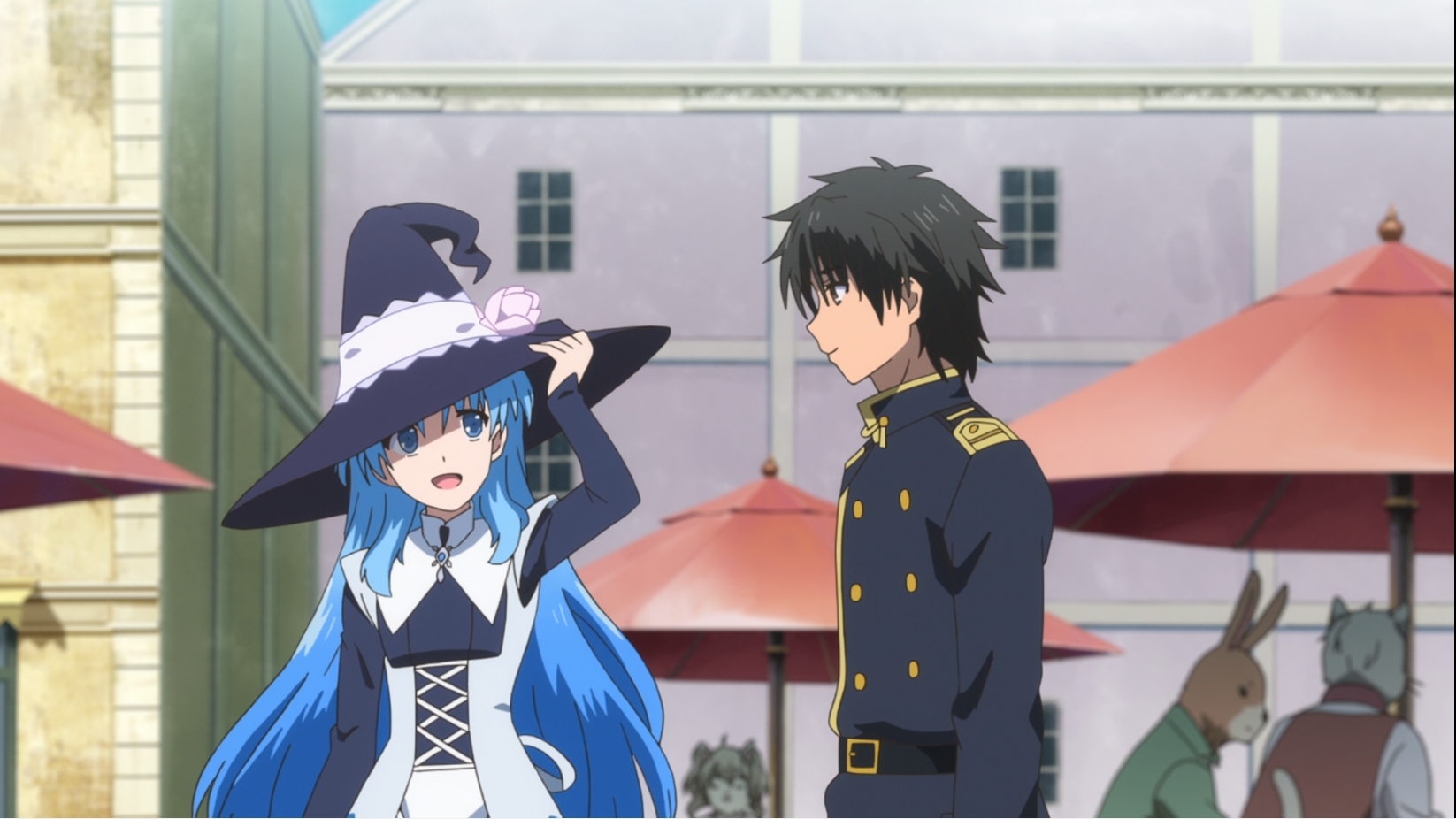 Seeing Chtholly and Willem like this, one almost wants to cheer them on.

So I present you the best heroine of this anime by the sheer process of elimination, Chtholly. If you’ve ever needed a picture-perfect depiction of the word “waifu-bait” then please, don’t go any further. Chtholly is perfect. Not Mikasa-like perfect in a sense that she does everything like a good independent woman, she’s perfect in a sense that she has the most amount of personalities I’ve ever seen a character posses. Seriously, it doesn’t matter if you like tsunderes, outgoing types or “I want attention” types, she has it all. She’s basically a different kind of character almost every episode, often even going through shifts in between scenes. In one scene she laughs when someone mentions how she and Willem look like a pair, in the next one she almost blows up from embarrassment when someone else mentions the same thing. Bravo, writers. You’ve really outdone yourself this time around. What is that I see? Only 1,077 favorites on MAL? Don’t worry, those westerners just don’t understand the genius behind the creation that Chtholly is. She also has her depression-like moments throughout the series, since, you know, I’ve heard that’s kinda trendy nowadays.

Anyway, both Chtholly and Willem are kinda into each other and since the relationship between the two seems to be one of the most liked portions of this anime, I’ll try to elaborate. From a realistic point of view, their relationship is not entirely unbelievable. Chtholly is a teen girl who has never seen a look-alike man in her life, it’s almost inevitable that she’ll hold feelings towards him. The anime doesn’t really do the setup a justice, however. It’s not a stretch to say that the two of them have barely held normal conversations before becoming a couple. Seriously, most of their interactions consist of Chtholly’s blushing to literally everything or acting Tsundere. I wonder why Willem even likes the girl. Maybe he just likes obsessed women, because Chtholly is obsessed with him to the point of tedium. She thinks about him day and night, whenever she has her famous “I’m breaking apart but I’m alright” moments she does nothing but prays for her knight on a white horse to come back. Either way, even if their relationship belongs to the better-executed parts of the series, it’s still disappointing given how much time it was given.

Almost no other characters besides the two are even worth mentioning. I imagine Ren must be a fan-favorite since she’s a loli without a personality that clings to the self-insert protagonists. There’s also Ithea, who’s actually not a terrible character. She has a lot of self-aware moments like when she calls out Chtholly for acting like a stupid attention-seeker. Sadly enough, since even the author himself knew that she’s the only one with a brain inside her head, she’s left out of the picture for most of the series. Truly a shame, but it tells you a lot about the show by itself. No one else is truly worth mentioning. Outside of the Troll maid. At one point I thought she was the mastermind behind everything, but apparently she’s been there just to troll others all along. 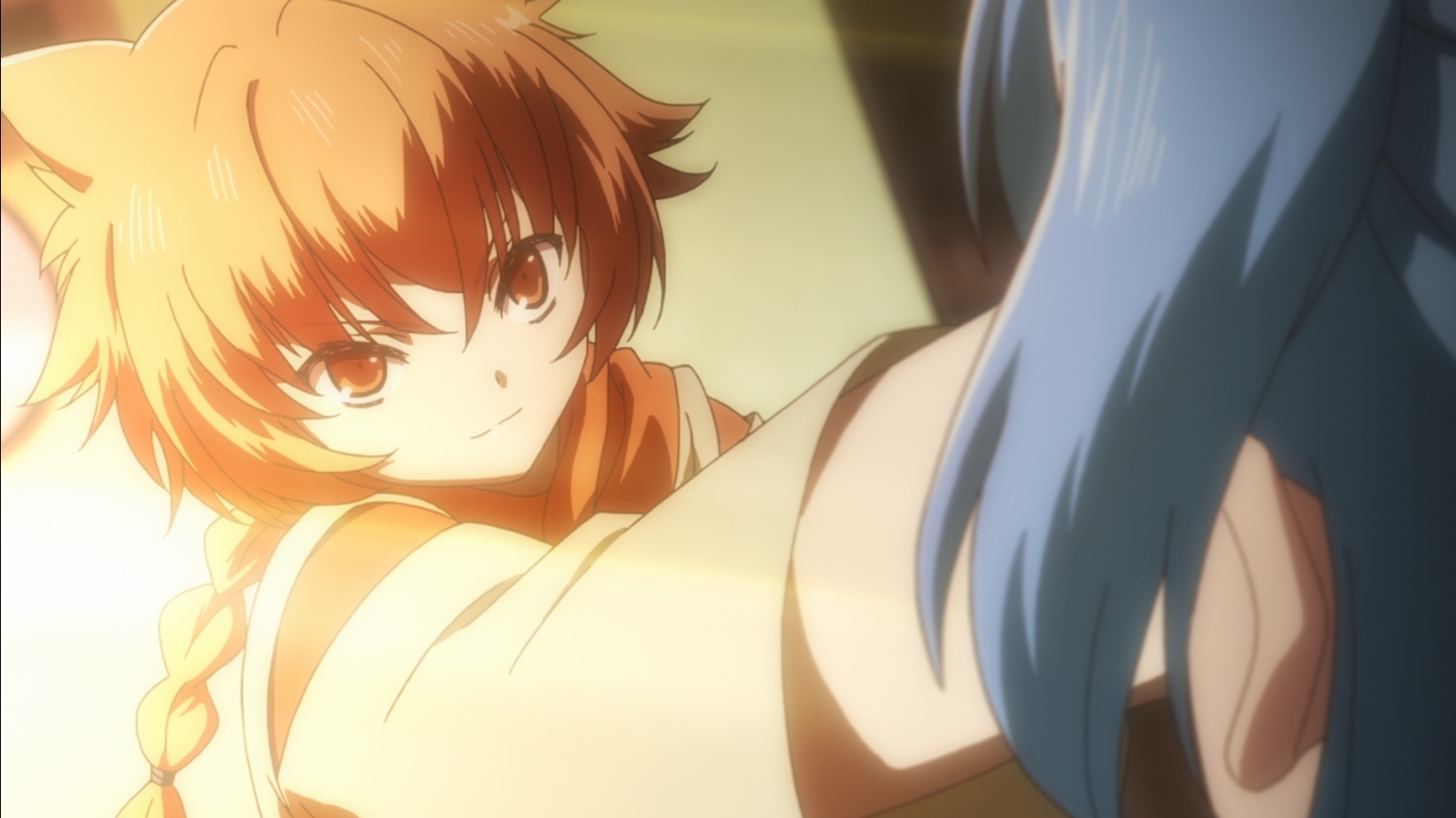 Ithea approaching Chtholly about her obsession with Willem. Definitely one of the most satisfying moments of the entire anime.

The world-building is an area that, if given proper time, could’ve easily been the saving grace for everything else the anime messed up. The fantasy world with flying islands and human/animal like species, full of small interesting concepts like racism and unforgiveness of past mistakes, does promise a lot of intriguing details and a potential satire-like depiction of our real world. Sadly, just as the story and everything else, it just comes out as incredibly undeveloped. Everything you could possibly account to as world-building happens only briefly and then is quickly pushed away off the screen so that our main characters can spit out whatever relevant dialogues they have in mind. The history of the world also remains a one big question mark for most of the series except some info-dumping exposition scenes which in the end only raise more questions. The greatest example of this is when the show tries to explain the inner-workings of the fairy-swords only then to never bring the topic back again despite not covering some obvious logic-holes. Now, if that was the only case of bad exposition then I could easily forgive it, but the show does it every single time. No explanations make sense, some of them are so brief and randomly placed that there’s a chance you’ll not even notice them which results in you not understanding a thing, since, again, everything is only brought up once and forgotten right afterward.

However, I imagine that all of these things are just a co-product of the most glaring issue with this series as a whole: it’s composition. I don’t think I’ve seen such terribly composed and paced anime in my entire life. Since the anime has a lot to adapt, it never stops. And I mean literally never. Cuts between characters talking in completely different parts of the world are often cut to mere seconds. There are no breaks for you to grasp the heaviness of certain scenes, there are no breaks for you to laugh when the show occasionally presents a good joke. The faster the better? Not really. It’s even more annoying when you consider just how much filler does this single-cour anime contain. There are certain episodes which could’ve been cut almost completely and nothing would’ve changed. Development? Yeah, as if any kind of development could save those characters. If the show cut at least some of those filler scenes there would’ve been much more time to use at explaining the world, or the story, or literally doing anything besides Chtholly getting all jealous because her all-mighty Willem cares about more people than just her. 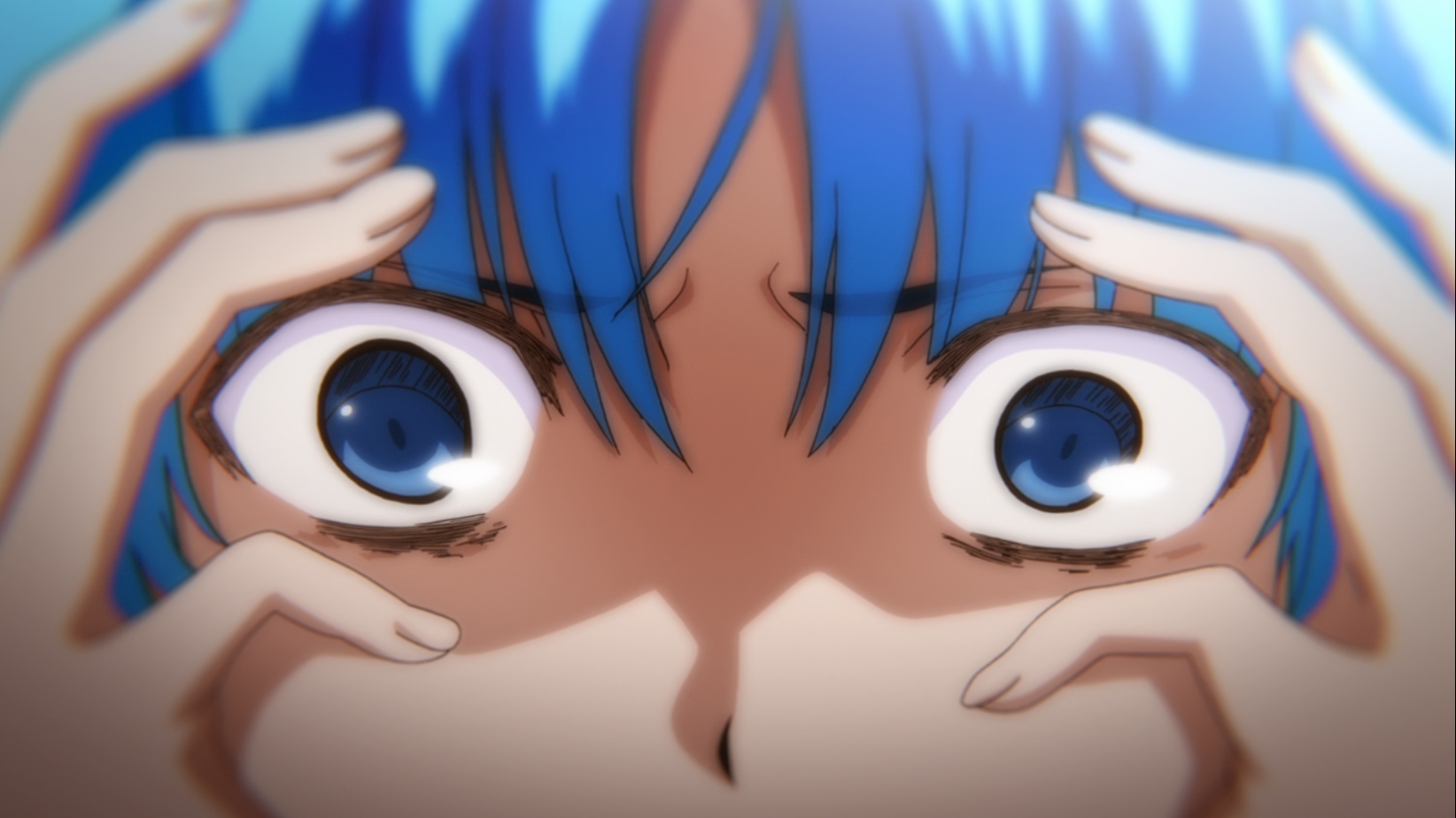 If there’s one thing I have to please the show for, it’s the animation. The anime looks nice when it matters. The action scenes, while still being questionably composed, do look sharp and smooth. Though it’s true that the anime saves a lot of effort in mid-section episodes, I’d say that its production quality as a whole is at least above average. Which, considering how awful it is overall, is quite an achievement. On the other hand, the audio by itself is quite disappointing. There is one piece of OST I remember humming to, but other than that, nothing memorable at all. The voice-acting is rather dull, though I imagine that’s not necessarily a fault of the VAs themselves, but rather of the fact that SukaSukas characters very rarely give away any kind of emotion. They just kinda talk in the same monotone throughout the entire series and that’s it. Again, one has to wonder if that’s a fault of their VA or the writer himself.

So, does SukaSuka has no redeeming qualities after all? I wouldn’t say that. It has some cool moments here and there, and some episodes weren’t completely terrible. It’s just that, as a whole product, it doesn’t work at all. It has these cool ideas on paper but never does anything with them. They get pushed back by incompetent writer/composition staff who, with all due respect, don’t know shit about how to create an anime. Add to that the obvious LN traits and fan-pandering and you have an anime that doesn’t just attack your patience, but your intelligence as well.

Conclusion? Seriously? Ahh, come on, I’m so tired of this. Okay then, here you have it:

It sucks. End of story.

The Good: The animation is good when it matters | The premise is interesting | Ithea is a decent character