Yakusoku no Neverland is a story-heavy show. Fortunately, the story is very intriguing and the premise is strong, unique enough to catch your attention but simple enough to grasp from a few sentences. The story is kind of about the mind games between the kids and the mother, Isabella, but not really. A lot of the conflict is actually between the kids, which I think is a good thing. In some parts it isn’t executed too well but in others the conflict between characters that have essentially the same motivation and goal works really well and makes the story a lot more interesting.

Unfortunately most episodes ended in a cliffhanger, which I don’t think worked well for this show. The world-building was left kind of unfinished, as some of the world-building present in the manga was left out of the anime adaption. Some of the plot twists were quite bad and didn’t make a lot of sense but some of them were very exciting and fit the story well. The ending was great but it left some questions, especially regarding the world. There aren’t any plot holes though, at least any noticeable ones, so the story feels consistent and makes sense. There are some plot points that are introduced in the anime but are only relevant in the manga, which is understandable but still not a very good thing. 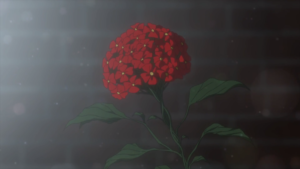 The atmosphere throughout the show is generally pretty tense with some lighter moments sometimes. Despite the horror tag, suspense and horror aren’t a significant part of the show. In the first episode the suspense and horror work really well to set up the story but after that they often feel forced and somewhat out of place. Some scenes were unnecessarily dramatic or weird and could’ve been handled with more respect for the overall tone of the show. The themes of the show are interesting and thought-provoking. The pacing was pretty good, it didn’t feel too rushed or too slow but some parts could’ve been better. 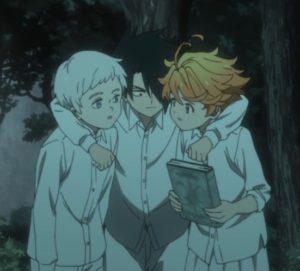 The bad guys were good as well. We never really found out much about the demons but Isabella was a really cool character. Her motivations and ideals were understandable, unusual and interesting. She’s not a generic villain the main characters have to beat but rather just someone in a similar situation with opposing ideas, even if they aren’t necessarily wrong. Sure, they might be or they might not be, but that’s not relevant here.

The side characters did not get a lot of screentime and basically no character development but they were still relevant to the story. Basically the side characters were uninteresting and only there to advance the plot. It seems like the main characters hoarded all the personality traits, even though they barely have a personality either.

All the sound in this show is amazing, from the opening to the voice acting. I often find myself listening to the soundtrack even after finishing the show, the music seems to always fit the tone of the scene and it’s just a lot of fun to listen to. I love the opening and both ending songs, especially the second one. They matched the themes of the show nicely. The voice acting really brings the characters to life even if they’re a little flat and the voice actors fit their roles well. In my opinion the sound was the best part of the show by far. While there isn’t too much to say about the sound other than how good it is, I have to mention it especially because it was such a big part of what made me like the show.

Yakusoku no Neverland is a show I enjoyed a lot despite it having some significant flaws, like flat characters and weird or unreasonable plot twists. Most of the animation looks good, though a lot of it is just characters standing around and talking, and I have no complaints about the art. The character designs look nice and the backgrounds and lighting fit the tone of the show. The soundtrack is beautiful and the story kept me invested. Overall Yakusoku no Neverland is a good show and I enjoyed it, but it had too much flaws to be an amazing show.